Quite a while ago (years, actually) I read an article online about weaving a V-shaped shawl in double weave. On a 4 or more shaft floor loom, you wove two separate layers for a distance, then joined them together in a V shape by cutting the warp threads of one layer and weaving them as weft across the other layer. The V was to cover your back and the two long parts come over the shoulders and tie in front. I bookmarked the article, meaning to get to that project some day, but the day never came.

Now recently I find that quite a few people have been posting articles and videos about weaving the V-shawl (or smaller cowl) in a single, not double layer. I was intrigued and started looking for how-to information. The quality of online instruction varies, but I did find a couple of postings that helped me understand how to proceed and they all use a rigid heddle loom.

The basic idea is to warp your loom, then leave a portion unwoven, wind that onto the front beam, then start weaving the scarf about 16 or so inches from the beginning. You weave to within 16 or so inches of the end, then unwind the cloth from the front beam and untie the knots on the front rod. You then bring the unwoven warp around to the right or left side and weave it across as weft. Simple, right? Simple but not easy, as I always say about weaving. Creating tension and weaving with a consistent beat is tricky, but luckily I found some good advice and will share that later in this post.

Most of the posts and videos describe the project as about 10 inches wide and 2.5 yards long, woven with DK weight wool yarn in a 7.5 or 8-dent heddle. The V shape portion of the cowl is roughly 10 by 10 inches and it is usually depicted as being worn in the front, not the back. The long circle of warp stripes can be twisted and worn around the neck for a warm and cozy winter scarf.

I made mine with rayon chenille in a 12.5-dent heddle. I have a cone of chocolate brown chenille and one of a variegated chenille dyed in rust, navy, purple and teal. I alternated stripes of the two yarns in the warp, then advanced about 20 inches before beginning weaving with the chocolate brown yarn as weft. I intended for the striped loop to be small, not long enough to twist around my head since I don’t like anything wrapped tightly around my neck. I intended it to drape in a U-shaped cowl which I wear in front, with the V in back.

I wove to within 20 inches of the end, then unrolled the part I had woven and untied the knots on the front rod. Slowly and with some difficulty, I found each successive warp end of the front and wove a row across the warp at the back end. The dark colored yarns, fuzzy quality and my rather poor eyesight made it hard to see, but I managed to weave the intersecting warps in a slightly flattened rectangle, which became a perfect square after wet-finishing. I am debating whether to make another one with a slightly longer warp, so as to loosely twist the drapey chenille scarf over my head, or just go back to the original idea of a wider shawl done in double weave on a floor loom. I would say I am leaning toward the latter.

Now for credit where it is due. I first read about this project in a post by Weft Blown. Then I looked for videos and found this very good one by Kari Fell. There are lots of other posts and videos out there, too many to mention, but I would like to thank my sources for their good information and encouragement. 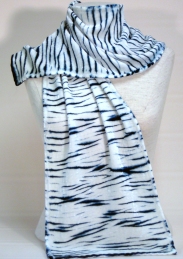